Quick Fire at the Slaughterhouse With C.E. Lawrence

C. E. Lawrence writes gritty dark thrillers. Her novel Silent Kills sees NYPD profiler Lee Campbell try to unpick the mind of a deranged killer. Her novel Silent Slaughter is soon to follow. She met me at The Slaughterhouse where we talked about vampirism and the body without organs.

In your new novel Silent Kills you deal with vampirism. What do you think of so called real vampires and why is the myth so enduring?

Interesting you say so-called vampires, because I think there are some cultures in which the presence of vampires is very real. It’s so interesting to me how cultural attitudes vary. In my writing class last night, a woman submitted a story about a reincarnated talking baby. Most of us took the story as being magic realism, and found it very amusing, but one of the students was raised in India, and said it was common in India to hear stories just like it, where very young children spoke of their past lives. So he saw the story completely differently from the rest of us! He took it quite seriously, and couldn’t see what we all found so funny. It was a real lesson in cultural relativism.

As far as vampires go, I think they are such a potent metaphor, sexually and psychologically. On a psychological level, we’ve all experienced “emotional vampires,” people who suck us dry of life and energy through their insatiable need for love and attention. People who take emotionally (or physically) without giving back are another variation – and the sociopath is the most virulent of all. Like the charismatic vampires in books and films, they often cast a kind of spell on their unsuspecting victims – lulled by their charm, the victim is captivated and sometime literally in their power, emotionally, physically or both. They don’t see the fangs until it’s too late, and the damage has been done. Sociopaths can’t turn an ordinary person into a creature like themselves, fortunately – but neither can they become like the rest of us. They really are creatures of the night, forever damned to roam in search of new victims; it’s the only way they can relate to other people.

As for the sexual aspect of vampires, I’ve always thought they were a lot like the incubus and succubus of the Middle Ages – those grotesque creatures that come to you at night and take advantage of you sexually. Talk about an outlet for repressed desire! There are some famous paintings of these creatures; here are a couple of links.

In both pictures, notice the woman’s pose of complete surrender, and how similar it is to shots in so many films of victims under a vampire’s spell. I think it’s a literary way of undercutting sexual repression and taboo. After all, it’s not your fault if someone has sex with you when you’re asleep, is it? You don’t have to be an English major or a criminal profiler to see that the puncturing of the neck by fangs is a pretty obvious substitute for a penis. And then there’s the exchange of bodily fluids . . . well, you get the picture.

When Bram Stoker wrote Dracula in 1897, he was culling together myths and legends that had existed in Eastern Europe and other places for centuries. I think it’s no coincidence his book resonated with the sex-obsessed Victorians, bringing the vampire legends fully into the light, as it were. (Stoker was a good friend of Conan Doyle’s, by the way, and Graham Moore plays with that idea in his novel “The Sherlockian.”)

Even when sexual desire and talk about sex became more socially acceptable, there was still something thrilling in this notion of surrender – of being “taken” by a handsome stranger in a long flowing cape who enters your bedroom by flying in through the open window. I mean, it’s the height of Gothic romanticism, isn’t it? And I find it interesting that the great German film Nosferatu features a truly frightening creature in the form of the great actor Max Schreck (“Schreck” being the German word for fear) – whereas so many later versions played up the attractiveness of the Count.

Today’s vampires on television and in films for young people don’t interest me all that much. They aren’t very sexy; they’re too buff and square-jawed for my taste. Maybe I would feel differently if I were fourteen years old, but even then I liked my heroes to be darker and quirkier. I liked Interview with a Vampire – the book, I mean. I thought Anne Rice was really onto something there.

As for my “vampire,” well, he’s a disturbed young man whose psychosexual disorder compels him to drain the blood of young women. In part it’s sexual, and in part it’s a kind of phobia about death – which is based on several real life cases. To find out why he has the compulsion, you’ll have to read the book!

What do you make of Deleuze and Guattari’s observation in Anti-Oedipus that ‘It is not the neurotic stretched out on the couch who speaks to us of love, of its force and its despair, but the mute stroll of the schizo. Lenz’s outing in the mountains and under the stars, the immobile voyage in intensities on the body without organs’?

Well, first I had to look it up – thank god for the internet. Secondly, these guys are WAY smarter than I am. There’s a reason I majored in English instead of philosophy. But I’ll do my best.

Perusing excerpts of the book, it reminds me a little bit of lectures I’ve attended by the great Lacanian theorist, Alain Didier-Weill – the use of graphs and charts to portray the spirituality of the inner life. I’m sorry to say I know not very much about Theodore Reich’s work, and I had to look up Lenz as well. The title “Anti-Oedipus” is intriguing, since it seems to repudiate Freud’s most famous example of psycho-sexual forces at work.

From what I can glean it refers to the idea that sexuality transcends bodily organs and their functionality and inhabits a higher plane that is perhaps closer to the spirituality of Nature. I’m not sure what schizo means in this context, but as a bit of a nature freak myself, I can state without hesitation that there is something essential and transcendent about being in the presence of Nature, whether in the form of a thunder shower or a woodland landscape, that seems the true and proper expression of the life-force, or libido, as Freud called it.

What do you make of Walpurgisnacht and to what extent is it an illumination of the things that preoccupy the waking mind today?

Aw, heck, again I had to run to my Google toolbar to do some research. Even though I double majored in German, I had only the vaguest notion of what Walpurgisnacht really is.

And what an interesting thing it is! Here’s what Wikipedia has to say: “Walpurgis Night (Walpurgisnacht) is a traditional spring festival on 30 April or 1 May in large parts of Central and Northern Europe. It is often celebrated with dancing and with bonfires. It is exactly six months from All Hallows’ Eve.

They had some cool photos of the bonfires in Heidelberg and other places. From what I gather, it’s kind of a Bacchanalian celebration of life, in the same way Halloween is a celebration of death. And as Halloween takes place when it’s really clear the sun is going away, Walpurgisnacht takes place when it’s evident the sun is returning – in the middle of spring, in other words.

In Helsinki they have huge, all night long picnics – how fun is that? In Germany, that’s the night where witches are reputed to meet on the Brocken mountain and revel with their gods. Well, that’s Germany for you. There are references in Goethe’s Faust, The Magic Mountain by Thomas Mann, Dracula’s Guest by Bram Stoker, as well as Who’s Afraid of Virginia Woolf? by Edward Albee.

So I guess my answer would be is that it seems to be a natural, universal reaction to the seasons of Nature – oh, look, the sun really is returning, so let’s party on, dudes! And bonfires seem to be a symbol in a lot of cultures of cleansing, moving on, a spiritual reawakening.

What are you working on now?

I just finished my fourth Lee Campbell thriller, Silent Slaughter. My killer in this one is a Professor Moriarty type – a brilliant, ruthless mathematician, a complete psychopath, the nastiest killer I’ve created yet. He’s a Type Four on the scale of offenders developed by Richard Walters and Robert Keppel – as bad as it gets, an “anger-excitation” killer, someone who gets off on the suffering of others. So I hope the book gives the readers some chills and hopefully thrills.

And I’m in the middle of a ghost story called The Vly, which is about a mysterious area in the Hudson Valley, in the foothills of the Catskills. “Vly” is an old Dutch word for “valley,” and I’ve recently become fascinated by the history of of the Dutch presence in the Catskills. Though the Dutch influence is almost completely vanished, they were the first European settlers in that area. Rip Van Winkle is an early 19th stereotype of a Dutchman – lazy, good-natured, feckless. Amusing in light of how we view the Dutch today!

And Irving’s storyline was based in part on local folklore, as well as stories from the Orkney Islands, where his father was born. Rip follows a quaintly dressed Dutchman into the hills, where he encounters oddly dressed people playing ninepins. When he drinks their liquor, he falls into the deep sleep that lasts for 50 years. When Irving wrote Rip Van Winkle, there were already American folk tales of Henry Hudson and his men playing nine pins with gnomes “a group of pygmies with long, bushy beards and eyes like pigs.” According to this tale, the spirits of Hudson and his men return to the mountains every twenty years to play nine pins with the gnomes. These are the men Rip meets in the mountains.

In my story a young boy of Dutch ancestry experiences a frightening supernatural phenomenon in the Vly in which he encounters otherworldly beings – perhaps his long-dead countrymen, perhaps goblins or ogres. In fact, your last question has given me an idea – I might just set the whole story on April 30th, and turn it into a Walpurgisnacht tale! Spooooky!

Thank you Carole for an insightful and great interview. 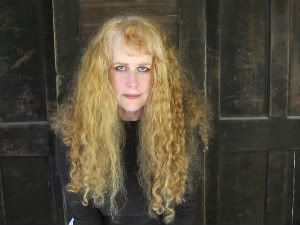 Get a copy of ‘Silent Kills’, available just about everywhere, take your pick:

19 Responses to Quick Fire at the Slaughterhouse With C.E. Lawrence