Gutted begins with Tony Black placing his protagonist, Gus Dury, firmly within a highly defined physical reality, juxtaposing that with some of the grittiest dialogue you will read outside a late night lock-in with a mob of angry gangsters, and igniting the story like a rocket. In the opening scene Gus is attacked and finds himself in a nightmare scenario:

“I’d been rolling about on a corpse. I had the blood of a dead man all over my hands”

This is a gritty and extremely real crime novel. Black in no way sanitises the crime he presents with an authenticity that at times makes you feel you are eavesdropping on criminals. The story centres on the events that ensue when a gangland owner is gutted after his pit bull kills a three year old girl. Gus investigates and finds himself immersed in a gangland war.

Black gives the reader a sharp picture of criminal life, of its habits, and tastes. He etches it with the details of everyday life. The intensive action of the novel is punctuated by a cultural sub-text, by the things these men and women do to relieve their bruised lives:

“I put on some Clash. Joe Strummer’s demise still taking the shine off them for me, but I was working through it. Felt more for that man’s passing than my own father’s. True fighter. So few of us left.”

That sense of us is implicit in the narrative, which portrays people at the margins seeking a sense of belonging, even to the things that destroy them. Gus himself is wary of outsiders, of the forces that threaten this microcosm of England. One of the threats is the intrusion of foreigners, those perennial antagonists of our indigenous xenophobia:

“The street seethed. Unctuous, lardass businessmen from Nowhere, Arkansas with wives that share a plastic surgeon with Joan Rivers in tow. All screaming out for McDonald’s and Starbucks. Why I’m slamming Americans, I don’t know. These days, they’re as likely to be Russian, Chinese, French – like it matters in our tragic little globalised world.”

Gus struggles to retain a standard as he dives below the scum line. The desperation hisses at you off the page:

“I CAUGHT THE FIRST BUS out of Sighthill. Kept looking for the signs that read ‘You are now leaving the jungle’. I was in a hurry to flee this dumping ground. It was strictly for the dispossessed. The druggies. The dangerous. The dole moles. The beyond help. I worried if I stayed there too long I’d begin to fit in. I knew that with less luck, less support, I’d be there myself. Holed up in some one-room rathole, downing Special Brew every night of the week, waiting for the next giro to arrive.”

His investigation throws up some unpalatable facts, such as the seeming complicity of the police in the brutal killing. These are venal characters competing in a polluted food chain, and this is the work of a highly accomplished portrait painter. Black portrays the bleak reality of crime, and has placed it in a compelling fast paced story that will not let go of your collar. And the ending is a necessary and unavoidable shock. 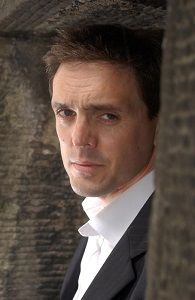 Find all things Tony Black at his website: tonyblack.net

At Amazon.com in paperback, hardcover, or Kindle formats

At Amazon.co.uk in paperback, hardcover, or Kindle