Chin Wag At The Slaughterhouse: Interview With Diane Hester

Diane Hester is a professional violinist who played in the Rochester Philharmonic before she became a novelist. She performed in Carnegie Hall NY. Her debut thriller is Run To Me, set in Maine. Diane met me at The Slaughterhouse where we talked about her new release and sympathetic characters. 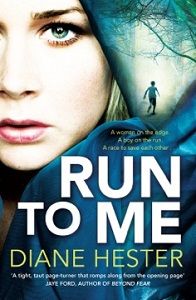 Tell us about Run To Me.

Run To Me is a chase thriller set in the wilds of northern Maine. Shyler O’Neil, a woman suffering post-traumatic-stress after the death of her son, retreats to an isolated cabin in the woods. There she encounters Zack, a homeless boy on the run from killers, and in fighting to protect him, comes to believe he’s the son she lost.

Publishers Weekly said of Run To Me, ‘The author makes good use of her rustic setting and clearly understands the value of sympathetic characters and the thrill of narrow escapes…’

What do you think makes a character sympathetic to a wide audience and do you think that is largely situational?

What makes a character sympathetic? I would answer that with a single word: desperation. To me that’s what makes not just a character but a story compelling.

To be sympathetic a character has to want something desperately. And there has to be some major obstacles stopping them getting it. The more desperate a character’s need and the bigger the obstacle standing in their way, the greater the drama. It’s not enough to simply put them in danger.

The most compelling needs of all are emotional. Our desire for love. Our need to protect those we care about. The wish to be forgiven our mistakes. These are universal human needs and a person fighting to achieve such goals is hard to look away from, especially when the odds are against them.

In Run To Me, orphan Zack desperately wants a mother’s love; Shyler desperately wants her son to return. Those desires mean as much, if not more, to those characters than their very lives. These are elements over and above the dangerous situation they find themselves in. Without those desires, the danger these characters face means little. Their desperate needs are what make us care.

However put a character with desperate needs in a desperate situation and you’ve got the best combination of all. Shyler and Zack might be sympathetic characters at the start of the story because each has suffered in the past. But the sympathy we feel for them won’t go far unless something happens to further challenge them.

A person’s character is revealed through their actions and without a conflict to drive them to act we can’t really know them. But block the path of a desperate person and everything changes. Then you see to what lengths that person is prepared to go to get what they so desperately need.

Do you think there is a division between female and male readership as to how they view desperate situations and how they judge whether a character’s desperation may be self-inflicted or not?

Certainly different story situations will appeal to different readers but I don’t believe that preference is entirely gender based. A story about a child in danger might have more resonance for both men and woman with children of their own. Then again that doesn’t mean other readers wouldn’t enjoy it as well. Even readers without children can imagine what it would be like to have someone they love put in danger and be faced with the prospect of saving them. We don’t have to have firsthand experience of another’s situation to be moved by their struggle.

As for a desperate situation being self-inflicted, I can’t see male and female readers having a different slant on this. I think people would react pretty much the same to a character wallowing in self-pity as opposed to one facing genuine dangers.

What do you make of the E Book revolution?

I think it’s tremendously exciting – the biggest change in publishing since the printing press! I don’t believe by any stretch that it will mean the end of print books. It’s simply another way to enjoy the stories we’ve always loved.

The ebook revolution has also provided a fabulous opportunity for self-published authors to get their work in front of readers and for readers to have access to books they wouldn’t otherwise see. The only downside is that not all indie authors take enough time to revise, edit and polish their work before publishing, and, sadly, this detracts from the efforts of those who seek do it right.

Graham Greene wrote, ‘There is a splinter of ice in the heart of a writer.’ What do you make of his observation?

I suspect he’s referring to a writer’s ability to stand apart from any situation, even ones in which they themselves are involved, and observe what’s happening with a detached eye. The writer’s readiness to view all suffering, including their own, as fodder for their next book and their willingness to inflict that suffering on the characters of their stories. Which doesn’t make us sound like very nice people, but I believe we need that measure of detachment in order to tell the truth about what we see in life.

What are you working on at the moment?

Another thriller set in New England. Opening scene: A woman driving alone at night hits a man on a dark wooded road and before she can call 9-1-1 he jumps in her car and forces her to drive on at gunpoint.

That was the idea I started with and for a while that was all I had. But I’ve since developed it into a full-length plot involving the murder of the man’s brother and a secret from the heroine’s past. (Sadly, I’m not one of those spontaneous authors who can just sit down and write wherever the story takes them – I have to plot the story first, before I can write it.)

Tell us about your career as a musician.

I studied violin at the Eastman School of Music and, briefly, at Julliard. After graduating I played with the Rochester Philharmonic and later with the Adelaide Symphony and Chamber Orchestra in South Australia.

Being a professional musician is a great way to see the world and meet all sorts of fabulous artists. As a member of different orchestras I’ve toured all over the eastern U.S. and much of Australia. I’ve gotten to play in Carnegie Hall, the NY Metropolitan Opera House, the Sydney Opera House, and the Adelaide Festival Theatre and have accompanied musicians as diverse as Isaac Stern, Itzak Perlman, Chuck Mangioni and Australia’s Little River Band.

As for making the transition to writing… So many of the things I learned in music I have found applicable to writing. The discipline of daily practice for one. (When you’re used to practicing violin 5-7 hours a day, writing for the same amount of time seems natural.) The unshakable belief that no matter how little talent I might have for something at the start, I will always improve if I stick with it. The ability to bounce back after rejections. Plus the techniques I learned for governing stage fright were a tremendous help in controlling my nerves when pitching my novels to agents and editors.

Tess Gerritsen and Robert Parker who write about New England and Boston in particular. Stephen King whose skill with bringing characters to life is a true inspiration! And James Patterson, with whom I share a love of short chapters and an obsession for thoroughly outlining my stories before I write them.

The highlight of my year will be attending the International Thriller Writers conference in New York in July. For the remainder of the summer and into September, I plan to do a series of author events throughout New England – the area where RUN TO ME is set. Details of all events will be posted on my website at: www.dianehester.com.

Do you always outline your novels first?

Yes, always. I can’t tell you how many times I’ve tried simply letting a story unfold without plotting it first. But after writing myself into countless dead ends, I’ve accepted that it just isn’t my process. To get where I’m going when writing a novel, I need a map.

For me, plotting a story and writing it are two very different functions and I seem to work best if I can keep them separate. When plotting, I’m constantly moving things around, asking questions; creating, changing and deleting scenes. But when all that’s done and I actually start to write the story, my goal is to remain fully immersed in the world of my characters. I can’t do that if I’m constantly stopping to think about plot.

In the plotting stage, I explore and develop my initial idea. I determine who my characters are, what motivates them, the obstacles they face, and decide how this will play out in the story – the all-important sequence of events.

What I end up with is a detailed scene-by-scene outline, a road map I know will get me from A to B. I know my story contains all the required elements of structure because I can see them in this mini overview. From this point on I don’t have to think about the plot any more. All I have to do is write it.

While this may sound as though I leave nothing to chance, that isn’t the case. I rarely get through my first outline without changing things. Once I actually start writing the story, new ideas always present themselves which requires me to redraft my outline. And that’s perfectly okay. The purpose of my outline isn’t to keep me rigidly bound to a pre-set plot but merely to give me a path to follow.

Thank you Diane for an informative and perceptive interview.

Buy links for ‘Run To Me’:
In the US: Amazon.com
In the U.K.: Amazon.co.uk
In Australia:
Angus and Robertson
Booktopia
Bookworld
amazon.com.au

Read a free sample of ‘Run To Me’

5 Responses to Chin Wag At The Slaughterhouse: Interview With Diane Hester