Chin Wag At The Slaughterhouse: Interview With Gary Haynes

Posted on February 22, 2015 by richardgodwin

Gary Hayne is the author of two counterterrorism thrillers. They have been described as “Plots that seem as if they are lifted from today’s news on the threat of terrorism.” His latest novel, State Of Honour, focuses on his character special agent Tom Dupree. Gary met me at The Slaughterhouse here we talked about the age of surveillance and political realities.

How important is honour in your novel State Of Honour, and in the age of surveillance where political realities can be easily manipulated is a man like Tom apprised of the facts or a pawn? 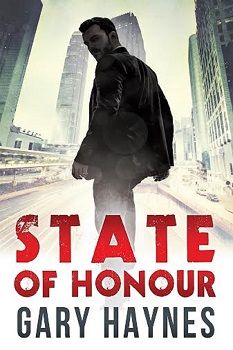 Honour is integral to understanding the main character, Tom Dupree. Haunted by his past, in particular, a broken promise to his mother that led to tragic circumstances, his pursuit of the honourable life is partly a process of redemption, and partly an antidote for the dark and violent worlds he finds himself in.

But honour comes in many forms, depending on the individual’s perspective, and so other characters in the first book exhibit their own sense of honour, too. State of Honour is based both in the West and the Greater Middle East. It is the juxtaposition of these various senses of honour that interests me as much as exploring it within my main character.

As for surveillance, this is only useful if you know who you’re looking for and why. And even when you do know, it still takes huge amounts of effort to utilize it successfully. For years, bin Laden evaded the best surveillance systems in the world.

Tom is aware of the overriding geopolitical issues, but not the surveillance on the ground, that is the web of assets, agents and core collectors in the vicinity at any given time. The best surveillance in the counterterrorism world, even now, comes down to local boots on the ground, rather than drones in the sky.

I don’t see Tom as a pawn, but rather as a man who is willingly serving others in the best way he knows how. In the last analysis, he is aware of what he needs to be aware of. But the overarching game within a game, as I like to call it, is only understood in the context of State of Honour by the players (and the reader, of course!).

As a lawyer how do you view the UKUSA agreement?

In general it makes sense for the UK and the USA (and Canada, New Zealand, and Australia, collectively known as the Five Eyes) to have an agreement that shares security intelligence and which fosters these “special relationships.” It was conceived in World War II and grew to prominence in the Cold War. In those perilous times it was not only a pragmatic coalition, but one which might be the difference between a collective life and death.

Things have changed since then, not least due to the prevalence and sophistication of security monitoring. Putin’s violent expansionist politics and the rise of the death cult that is ISIS have brought about new threats, but these do not present a real danger to the foundation stones of Western democracy – freedom of speech and the rule of law – although they will be recurrent themes for the next decade or more.

As a lawyer my main concern is to uphold, in my own small way, the foundation stones. But the question is: at what cost? Many theorists have said that the main threat to the foundation stones are not external, but internal, meaning that our governments will utilize our fears, well-founded or not, to increase their surreptitious activities.

Do I want to live in a threat-free bubble at the cost of losing my individual rights? Certainly not. Do I think that a benevolent(ish) form of “1984” is acceptable? Certainly not. But a government’s first duty is the protection of its citizens and so a sensible balance has to be reached, one that is best overseen by the separation of the courts from the state, and the interpretation of laws passed by democratically elected governments with a real mandate on such important issues.

In my view, the sharing of security intelligence is important, but a government should not subjugate its own laws to that of another, just because it partakes in this collaboration.

What do you say to those people who view the activities of an organisation such as Echelon and the Menwith Hills listening station as invasive, or has privacy been erased by the internet?

The Five Eyes collect information in many ways. They are constantly monitoring all forms of communication, including email, social media and phone calls. They are checking for repeated, sensitive words in a particular context, and certain patterns of otherwise innocuous words. These trigger alarms in some of the most sophisticated computers in the world. 99.9% of this is just noise. The intelligence communities aren’t interested in eavesdropping for the sake of it. It simply serves no purpose, and they only dig a little deeper in instances where they have a real suspicion.

As for the Internet, your personal viewing history is more reliable than any autobiography could be. It is fairly easily available too, which is worrying.

The problem I have as a lawyer revolves around the question of intention. By this I mean that two people may look at the same sites for completely different reasons. One might be a potential terrorist checking out ISIS recruitment and bombmaking for the purpose of a domestic jihad, and the other might be entirely innocent. One has intention and one doesn’t. Increasingly, in my view, the demarcation line will blur, and what we do, even if innocent and without any harmful intent, will have the potential to be used as a completely unjustified and unknowable blackball that may, for example, limit our job opportunities. But I do not believe that the security services are overly invasive. Besides, if they are interested in you, you won’t know about it.

What is the likelihood of a false positive and how useful is it dramatically to a writer of thrillers?

Many thriller writers use false positives and I use them myself. It can help to produce a great twist, or be used as a red herring or a deflection.

The term is used widely in the sense of a medical misdiagnosis, and is, I suppose, the opposite of a placebo. I have seen research that states that people exhibit the symptoms of the disease they in fact do not have, which is both tragic and interesting. But In the counterterrorism world a “misdiagnosis” can have even more profound and often lethal consequences, of course.

It is useful dramatically but it cannot be overused, otherwise the reader will feel cheated. I utilized the technique quite a lot in State of Honour because I wanted to create a sense of disorientation in the reader that reflected the frenetic, three-day period that my hero, Tom Dupree, spent searching for the kidnapped US Secretary of State. One of the most powerful scenes in the book, or so my readers tell me, was a reveal that seemingly came out of nowhere. The trick is to use enough smoke so that the reader doesn’t anticipate it, but on reflection he/she can say, oh yes, I can see where that came from now.

How does a character like Tom fit into this global situation, that may be described as Manichean given the extreme polarisation of the conflict as represented by the media?

First off, he is a well-educated man who speaks several languages. But he would not describe himself as an intellectual. He has chosen an area of work that is physical as well as mentally rigorous. He doesn’t see the West and its enemies as polar opposites per se. In fact, it would be a disadvantage, because part of what makes a good special agent in the Bureau of Diplomatic Security is a degree of empathy.

In many ways, of course, the geopolitical world is polarised. The difference between those countries who strive, however imperfectly, to uphold the rule of law, and those states like Russia, and organizations like the Islamic State group, are so stark that it is difficult to see any form of compromise.

But Tom is focussed more on the characters that inhabit his immediate world, rather than the overarching geopolitical situation. I explore and comment upon these wider concerns in my novels, but I use other voices or the narrator to do so.

How has your work as a lawyer influenced your writing?

As a lawyer engaged in litigation, I deal with a lot of people suffering from varying degrees of stress. This is why I write about people in stressful situations, I suppose, namely thrillers. But I have always been drawn to the genre, even before I was a lawyer, so perhaps the link is a tenuous one.

But being a lawyer undoubtedly helps a writer understand the human condition, in particular, those forces that motivate people, even when they are saying the opposite. It has also crystallized my belief that most people are infinitely complex, and that out there among us are people we now call sociopaths, people who are so difficult to understand that the only conclusion is that they lack something that the majority of us possess.

As a lawyer I deal with tens of cases at any one time, which results in having to assimilate thousands of pages of often difficult facts. This undoubtedly assists in writing thriller plots with their twists and turns and reveals. I have good research skills, as most lawyers do, which were honed over six years of training. Sometimes winning a case can come down to examining one sentence written on a piece of paper. This focus on the minutiae assists in uncovering the root of what I am researching, which is particularly important when writing counterterrorism and political thrillers.

Graham Greene wrote, ‘There is a splinter of ice in the heart of a writer.’ What do you make of his observation?

For me, it’s a warning to writers. A novel should not be used to espouse a particular social or political ideology. Writers do, of course, reveal something of themselves via their narrator or characters, but a novel is neither the best nor the appropriate vehicle for this type of opinion.

Novels should be plot and character driven, not ideologically driven. He was also suggesting, I believe, that novelists should go further and not attach themselves to belief systems, which are by their nature, confining. The splinter of ice in the heart symbolises detachment.

What are you working on right now?

I’m just finishing a stand-alone thriller based in the UK. It’s about a seventeen-year-old girl and her journey with a man she hires to help her find her two missing brothers. I’m also completing a WW2 novella based on the last days of Berlin. Then it’s the next Tom Dupree thriller.

What advice would you give to yourself as a younger man?

Find out what makes you want to get up in the morning, what you are truly passionate about, and start doing it. Aim to be the best you can at it.

Thank you Gary for an informative interview.

State Of Honour can be had at Amazon US and UK

2 Responses to Chin Wag At The Slaughterhouse: Interview With Gary Haynes