Chin Wag At The Slaughterhouse: Interview With John Kenyon

Posted on September 29, 2012 by richardgodwin

John Kenyon is a crime writer and editor of Grift magazine. He has been published in Thuglit, A Twist of Noir, Shotgun Honey, Beat to a Pulp, Pulp Modern and more.  He’s also going to be on the slate of readers at the Snubnose Press edition of Noir at the Bar, Oct. 5.

John met me at The Slaughterhouse where we talked about the sanitisation of crime and the preoccupation with genre.

Do you think there is a demand for fiction to present a sanitised version of crime?

Demand is a funny word. There is the call of the marketplace, and then there is the imperative. I’ll tackle the commerce side of things. Yes, there definitely is a demand for a sanitized version of crime in fiction; just look at the bestseller list. The PIs are all broodingly handsome, the femmes fatale all stunning, the criminals all devious masterminds bent on destruction. Yet what is most real crime? A bumbling guy with a decreasing range of options who decides to take a wrong turn out of perceived necessity, often making mistakes that put the cops on his trail in quick fashion. It is driven by economic desperation more than inherent evil. Even what we think of as “realistic” crime fiction is a hyper-stylized, compressed version of reality. Interestingly, I suppose this take isn’t “sanitized” so much as buffed and polished. If anything, the alternate demand is for things that go well beyond reality, spilling buckets of blood, running off round after round of ammunition and blowing things up. Again, the preponderance of crimes are decidedly less dramatic, but who wants to read that?

I always find this question interesting. Who worse to answer this than the writer himself? I can tell you who I love to read, those whose work I aspire to equal, who write the kind of stories I try to write, but as for actual influence? Ask someone who has read my work.
I find it difficult to write something without humor rearing its head. In real life, we cut-ups do this to lighten dark situations. I suppose humor serves the same purpose in crime fiction, to alleviate some of the torpor of depressing events, to give the reader a breath (and to make the hard stuff hit that much harder in contrast). People like Elmore Leonard, Carl Hiassen and Lawrence Block do this very, very well. I also come from the world of journalism, and can’t help but draw inspiration from writers like Michael Connelly or Laura Lippman, who found ways for that no-nonsense storytelling style to evolve into a voice that is at once poetic and gritty. And Connelly is joined in my shrine to the holy triumvirate of crime writers by Dennis Lehane and George Pelecanos, all three pure storytellers who come as close to capturing real life as anyone. There is a thin line between being influenced and practicing mimicry. I hope my work is the former.

Do you think fiction is being held back by too much emphasis on genre?

I believe certain readers are depriving themselves of quality books because they give the notion of genre too much credence. They either feel they are genre readers and rarely venture beyond it or dismiss genre as less worthy than literary fiction and ignore vast bodies of work. That’s why, as much as I love crime and mystery fiction, my favorite writers are those who push at the boundaries of the genre. George Pelecanos writes about crime, but can he be considered a crime writer anymore? Or Tom Franklin? Or James Sallis? They don’t let the notion of genre constrain them, and those of us who read them benefit.

I find it silly when authors consciously decide to write in a genre. John Banville’s books as Benjamin Black are well-regarded, and everyone knows it’s his work, so why the silly pseudonym? Why not be bold enough to say, “This is what I’m going to write this time out. If you like me, come along for the ride. You just might like it.”

Tell us about your novel.

My novel, Grace Falls, tells the story of a mid-sized Iowa city two years after a devastating flood rolled through the area. Four newcomers of various vintage pick up the threads of their lives when they arrive – a newspaper reporter, a mob thug, a privileged CEO and a rookie cop – and those threads begin to weave together into a larger story about drugs violence and corruption. The overarching story being told is this: what happens to the natural order of things when Mother Nature decides to level the playing field? It’s being read by some friends for feedback in anticipation of shopping it around to interested parties this fall. Stay tuned.

Beyond that, I’m halfway through a heist novel that finds a member of the 1% under siege from those who have had enough, and am doing research and plotting on a third with a bit of a supernatural twist.

Is there a particular event that has influenced you and changed your life?

Nearly eight years ago, my wife and I lost our first son to prematurity. He was born at 24 weeks, or 16 weeks early, and weighed about a pound. He spent three months in a neonatal intensive care unit – on what I have described as a backward rollercoaster ride in the dark – before finally succumbing to the challenges stacked against him. I have never felt such sustained sorrow, and nothing else in my life has had such influence. We spent hours by his bedside on a daily basis, willing him to improve, educating ourselves about the intricacies of his treatment and care. I learned more about myself in those three months than I thought possible. My notions of pain, heartbreak, hope, fairness, faith and possibility were challenged, broken down and rebuilt throughout that time. I emerged with a new sense of purpose. My core beliefs strengthened – ours is not a fair or just world; good guys rarely finish first; you would be amazed what you can endure. Anyone wondering why I found a home in crime fiction should wonder no more.

What are you working on at the moment?

I’m putting the finishing touches on the first novel and slowly making my way through the second. I’m also working on a contribution to Paul Bishop and Mel Odom’s “Fight Card” series, which has been a blast to write, and should be out in early 2013. Beyond that, I chip away at short stories as the muse strikes. Just this morning, I hit upon a way to finish a story that I have been working at off and on for the past two years. I haven’t touched it in months, but suddenly it all seems to have fallen into place.

Beyond that, I’m hard at work on the second print issue of Grift magazine. That means reading through dozens of short fiction submissions and working with writers on non-fiction pieces as well. I’m finding it to be like the sophomore effort for anything: you have your entire life to do the first one, and a few months for the follow-up.

You mean beyond the whole “wonderful father, loving husband, pillar of the community” sort of thing? As someone who worked hard at everything he did, who labored to raise the profile of the genre and literary works in general, who turned out some prose that was worth the time (and occasionally the money). As someone who did what he said he would do.

Graham Greene said writers have a piece of ice in their hearts. What do you make of his observation?

I would argue that the size of that piece of ice is directly correlated to the quality of the writing. If graphed, it would look like a bell curve. If you have no ice in your heart and constantly worry about what others will think, your prose will suffer. At the other end, if your heart is a block of ice, your lack of empathy likely renders your prose too clinical. You can be a detached observer of the life around you, but only to a degree. Somewhere in the middle, with just enough ice to say convention and decorum be damned, but not so cold as to lack the ability to feel for your characters and readers, is where I want to be, and where I think the best writers reside.

How much sexual pathology do you think is tied up in murder?

It depends entirely on the crime. I’m sure Freud would say that it is tied up in every one, but I would beg to differ. Rage, and the differing abilities people have in tamping that down and/or channelling it more productively, is the real driver. Is that sexual in nature? Perhaps at its base level. Rage, ego, ambition, drive… all of these are tied to sex and our constant lizard-brain pursuit of it, right?

What do you see as the future of publishing?

It’s all about putting writing in the hands of readers? No matter how that occurs, there always will be that relationship. I don’t think print books are going anywhere – witness the resurgence of vinyl album sales over the past decade for precedent – but I do think more and more people will turn to digital means for material. That’s not great for the printers of the world, but I believe people actually are reading more, and the successful writers, publishers, vendors, etc. will be those who figure out the way to take advantage. I think a great example of the possibilities ahead came with the way Reagan Arthur handled George Pelecanos’ What It Was. It was offered as a cheap ebook (I bought it for 99 cents before realizing there were other options), a cheap paperback ($10) and a deluxe, slip-cased hardback. That hits pretty much everyone, and it was released that way all at once. You hit someone who just wants the story itself, someone who likes paper in hand, and someone who wants something collectible. That is the future. 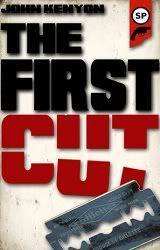 I took that to heart to an extent with my collection, The First Cut. The fine folks at Snubnose Press put it out as an ebook, but when I heard from friends and well-wishers that they wanted something to put on a shelf, I made it available in paperback as well. If there ever was demand for a hardbound version, I would pursue that, too. In other projects, I’ve chosen the format based on the audience. Grimm Tales, a short story anthology I edited, was issued as an ebook so we could maximize its reach for the 17 contributors, while Grift, my magazine, was limited to print because I wanted to give its contributors the chance to have a tangible way to get their stories out there. Each has had its benefits and drawbacks, and either project could be offered in another format if there is demand.

Thanks John for a great interview.

Grimm Tales can be had at Untreed Reads here.

4 Responses to Chin Wag At The Slaughterhouse: Interview With John Kenyon