Quick Fire At The Slaughterhouse: Interview With Keith Nixon

Keith Nixon writes gritty, hardboiled crime fiction. His new novel is The Corpse Role. It is about a major robbery, and features DI Charlotte Granger investigating as her own past threatens to catch up with her. Keith met me at The Slaughterhouse where we talked about his new release and crime fiction.

Tell us about The Corpse Role.

The Corpse Role marks a slight change in direction for me, into the realm of police procedural.

When the body of a security guard implicated in a major robbery two years ago turns up in a shallow grave DI Charlotte Granger is called in. £1.2 million went missing in the heist – the money has never been found and the culprits remain at large. At the time the robbery had been major news and becomes so again, with investigative journalists, her own superiors and career criminals crawling all over the case. However, Granger’s own past threatens to catch up with her…

To what extent do you think crime fiction sanitises crime?

My view is yes it does, but the extent will vary depending upon the individual. In the vast majority of cases both author and reader have little, if any, direct experience of the crimes they are portraying or consuming. In my debut, The Fix, there’s a death within the first couple of pages. I’ve been asked more than once if it’s autobiographical!

There are so many channels for people to experience an image of crime today – via the internet, news reports or newspapers – most of these are far more graphic in their depiction than a novel.

Do you think that the publishing industry is in a state of crisis?

That’s a very interesting question. It’s definitely in a state of change. Whether a change in the status quo is a crisis depends on how you generate your profits. I’m sure Amazon would see the current game as fabulous for them! But it seems that despite the changes in routes to market the big publishing houses still hold sway online and in the stores.

Whatever your perspective ultimately this is good for the reader because it increases choice.

Tell us what else is on the cards for you this year.

I have another Konstantin novel out May 11th titled, I’m Dead Again.

As for work in progress I’ve another police procedural well underway, which has meant a pause in writing the fourth Konstantin instalment and I’m planning the third, as yet untitled, part of my Roman historical series about Caradoc, the first British General. It’s been a hard choice what to focus on!

Keith thank you for a great interview. 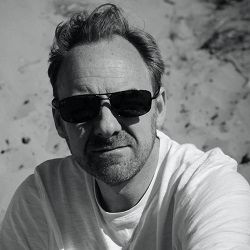 Get a copy of ‘Corpse Role’ at Amazon.co.uk or Amazon.com

See all Keith Nixon’s books at his website and Amazon Author Page.

One Response to Quick Fire At The Slaughterhouse: Interview With Keith Nixon