Quick Fire At The Slaughterhouse: Interview With Linda Rodriguez

Linda Rodriguez is a poet and novelist. Her second Skeet Bannion novel, Every Broken Trust (St. Martin’s Press/Minotaur Books), is available for sale now and was selected by Las Comadres National Latino Book Club. She is the president of the Borders Crimes chapter of Sisters in Crime, a founding board member of Latino Writers Collective and The Writers Place, and a member of Wordcraft Circle of Native American Writers and Storytellers, Kansas City Cherokee Community, and International Thriller Writers. Linda met me at The Slaughterhouse where we talked about her new release and her crime fiction.

Tell us about Every Broken Trust.

Life has settled into routine for half-Cherokee Marquitta “Skeet” Bannion now that she’s gained custody of fifteen-year-old Brian Jameson and shares care for her stroke-impaired father with her ex-husband—until the past reaches out to destroy everything she holds dear. A party to celebrate the arrival in Brewster, Missouri, of George Melvin, a Kansas City politician, rapidly turns into disaster when Skeet’s best friend, Karen Wise, stumbles on a body in Chouteau University’s storage caves and is attacked herself. Skeet works to keep Karen safe, even as Karen becomes obsessed with the dead man’s drunken claim that her husband’s accidental death years earlier was murder.

Brian’s emotional entanglement with the politician’s rebellious daughter and Karen’s fixation on the politician as her husband’s murderer frustrate Skeet’s efforts to keep them both safe and out of trouble while she tracks down the killer, who’s targeting Karen to remove a potential witness. Even Skeet’s friends and neighbors in Brewster keep secrets from her, and Skeet wonders if any of them are what they seem. Skeet’s Cherokee grandmother explained to her that the world depends on balance, that anything that throws it out of harmony must be restored before it brings chaos. Now, that very chaos is threatening her world. Not knowing who she can trust any longer, Skeet struggles against the clock to solve a series of linked murders stretching into the past before she loses Brian forever and her best friend winds up in jail—or dead.

To what extent do you think trust breaks people?

I think we can’t live without a certain amount of trust in other people, obviously. And at the personal level, we can’t be happy if we can’t trust the people we love, the ones who are closest and most important to us. However, when that trust is betrayed, it can be not only immensely painful but truly damaging to us. So, unfortunately, we are in the difficult position of needing to make ourselves vulnerable to people who have the ability to greatly injure us.

This is a difficult situation for most people to live in. Some people manage this dilemma by closing themselves off to others and refusing to trust and therefore make themselves vulnerable. Some people open themselves completely and trust everyone, no matter how many warning signs they get. Most of us try for something in between those two extremes, balancing the need to trust against the need to be safe from harm and trusting people after they have given some evidence of being trustworthy. We fool ourselves into thinking we are sensible when we do this, but actually, it is as foolish a choice as either closing oneself off from trust or leaving oneself wide open and vulnerable to everyone. We have no way to really know how trustworthy others are until they have passed through a situation where they might have betrayed us and didn’t—and even then, they still might betray us in a different situation. We manage the unbearable tension by deliberately blinding ourselves to those possibilities. Humans are the animals who deceive themselves in order to survive.

As a female author how do you approach writing from a male perspective?

I actually think it is easier for women to write accurately about men than vice versa. Like other populations with less power in society, we grow up always watching the dominant segment of society, men, trying to figure out what makes them tick, how to please them, how to keep from angering them (which is often physically dangerous for women), how to negotiate a society that’s set up on their rules. Men don’t have the same incentive to do this with women, and in general, they don’t. I’m speaking in the aggregates here for both men and women since there are always exceptions.

As for myself, I grew up with many brothers, male cousins, and male friends. I was the counselor and shoulder to cry on for all of them. I didn’t have good, close women friends until I grew older. Consequently, it’s still easier for me to project myself into most male characters than into certain kinds of women with whom I’ve had little contact. I don’t imagine that’s the case for all women writers, but it is for me.

I’m writing the third Skeet Bannion novel right now, and I’m having a great time being back in that character and that community. I’ve just sent my agent a YA fantasy novel, the first of a trilogy, to start submitting. That will be something new for me, but I’ve long been a fantasy reader, and I’m excited about writing in the field. I have the first draft of a standalone thriller almost finished. It’s about the director of a battered women’s shelter on the run to save the life of a young boy and the man who ends up reluctantly involved with them. And I’m doing research for two big historical novels, one about the Cherokee in Oklahoma from right after the Trail of Tears to the end of the Civil War and the other about the War in Vietnam, both at home and overseas, through the viewpoints of a brother and sister.

That time period immediately following the Trail of tears for the Cherokee is one full of conflict and amazing accomplishments that’s never really been written about. I spent a whole day in the archives of the Cherokee Nation of Oklahoma recently. They have a treasure trove of handwritten (in Cherokee syllabary) letters from that era. I’m working on my Tsalagi right now, which is mostly spoken, trying to learn to read handwritten syllabary.

For my generations of Americans, the Vietnam War was a gash across the world. No matter what side you were on, you were affected if you were an early Baby Boomer living in the States. I had a brother, father, cousin, two lovers, one husband, and several friends who served in Vietnam on active duty. I lost several friends and classmates over there. I spent most of those years fighting against the war and trying to have the soldiers brought back home. The society of the United States was never the same after that war, and it left scars on my entire generation. The research has been heartbreaking.

And I have another book of poetry that’s about ready to send to the publisher. I am a congenital reviser and keep rewriting them, always trying to make them better, but most of the poems in the manuscript have been individually published now, so it’s time to send it off finally. Plus, I’ve promised myself that I’ll bring more balance into my life by returning to my fiberart work, which I believe fills the creative wells for my writing. I try to stay busy.

Thank you Linda for an insightful and eloquent interview. 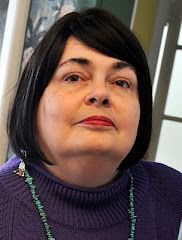 3 Responses to Quick Fire At The Slaughterhouse: Interview With Linda Rodriguez