Quick Fire At The Slaughterhouse With B.R. Stateham

Posted on November 24, 2011 by richardgodwin

B. R. Stateham, is well known for his gritty hard boiled Noir writing. His character Smitty, a professional hit man, is proving popular. He has just released Call Me Smitty: Carnival. He met me at The Slaughterhouse where we talked about psychopaths and heroes.

Smitty is proving a popular and enduring killer. Do you think it is possible to have a moral psychopath?

First we have to decide if Smitty is psychotic. Allow me to suggest he is not. He IS bitter, disillusioned, suspicious, and revengeful. But crazy? No. My definition of someone who is psychotic is that of someone who is completely amoral. Someone with no conscience at all. Smitty is neither. And I think in many of his stories we see the evidence of just the opposite. He DOES have a set of morals; a Code of Conduct. In the final analysis, the innocent never get harmed.

What do you think is the difference between a psychopath and a psychotic and do you think there is any moral redemption in the moralists?

Hmmm . . . that is, in a way, like asking what is the difference between a poTAto and a poTAHto. Okay, here’ goes–someone who is psychotic is just flat crazy. Insane. Completely divorced from reality.

Someone who is a psychopath is the above definition of psychotic, but with an added layer of planned, calculating, deep seated malevolence. In this case think of a Hannibal Lecter kind of character.

As to the possibility of any moral redemption in the moralists, that’s a definite . . . maybe. A moralist who genuinely believes in a code of morals is just as likely to be a Mother Teresa. Or an Osama bin Laden. It depends on the set of morals we’re speaking about, the depth of the convictions, their commitment to the idea of spreading the beliefs to others. Or punishing others for a lack of belief.

Is Smitty based on any real characters you have known?

The quick answer to is “No, not really.” Smitty popped into my head one day while I was doing a writing exercise over at site called ThinkingTen. The site gives you a couple of prompt words and you’re supposed to write a short flash piece in ten minutes or less. I don’t remember what the prompt words were but I started writing. . . and then kaboom! Smitty leapt out of my unconscious fully blown up and fully functional.

To be honest, the moment Smitty was born was quite exciting. I instantly knew I had something here; had a ‘keeper.’ Smitty was the amalgamation of all the tough guys I had read in my life. But different, even unique, from the others. I can’t tell you how I knew he was different and unique. But I knew he was. And in a little over a year and a half we have 19 short-stories and two novellas out.

Do you think today that all heroes are anti-heroes?

Oh no, not at all. I have two other characters I write about whom you may or may not be aware of. Turner Hahn and Frank Morales. Homicide detectives and partners. They are the essential definition of classic ‘heroes.’ Honest, competent, tough, generous, yet sometimes down right mean and nasty when they have to be. Both have a high standard of ethics. Both fret over the travesties they face each day in their line of work. Both worry about their actions possibly being more harmful than beneficial.

But that is a whole different blog discussion, isn’t it?

Thank you Bryant for a great Quick Fire, there follows your recent Blog Post about Call Me Smitty: Carnival.

Here it is, kids.   Call Me Smitty: Carnival. Number seven in the series.  Seven installments total in the series featuring my hit-man specialist, Smitty.

‘Been thinking of late about Smitty, and writing dark hard boiled/noir, and the components in what makes for a good short story.  And heroes.  Just exactly how do you  define, design, create, write–a hero?

Is it an accident?  Do writers deliberately go out and build, like some mechanical exacto set, a character and then slap the label ‘hero’ on him?   Are heroes always  Good and True Blue? Or . . . could a hero be normal.  A person with as many weaknesses as he has strengths?

Even more interesting, could a hero be a bad guy?  Bad in the sense of what society might label someone who does not stay within the accepted social parameters of society.  Could a killer be a hit-man?

Guess so.  Smitty seems to have developed a small following of fans who enjoy reading about his . . . uh . . . adventures.  Hits, or rub-outs, would be more precise.  Someone is going to get whacked in each of his stories in one form or fashion.  And usually it’s pretty violent.

What about short-story writing.  How do you define a good short-story?

Let me offer this definition.  In the genres I write, namely hard boiled/noir and fantasy, they have to be a vivid snapshot of the darkness.  Imagery in brevity–emotional undefined–unforgettable.

Let me give you some examples.  In ‘Call Me Smitty: Carnival’ there is a short story entitled, Terrible.  A man wants hires Smitty to kill his wife.  Even insists on Smitty killing her in a certain fashion so he can stand and watch and enjoy every second of terrified demise.  Brutal.  Gruesome.  Jacked with emotion.  And Smitty?  What of his response? 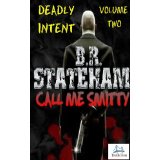 In volume two of the Smitty series (Call Me Smitty, Deadly Intent) Smitty rescues a young mother and her children from a husband/father intent on killing them all.  They’re standing alone, defenseless, in a driving rain on a busy street corner watching traffic go by and knowing, each and every one, they are about to be slaughtered.

From out of the driving rain Smitty finds them.  Like some mythological creature he materializes out of the diluge and saves them.  Makes sure the husband never bothers any of them again in.

But what made this man the way he his?  How do you become an ‘anti-hero hero?’  Could you write a short story that describes how a good man who once believed in being honest, thoughtful, caring, and loving suddenly turn into the hard edge, emotionally dead kind of soul a hit-man needs to have in order to succeed in his new profession. 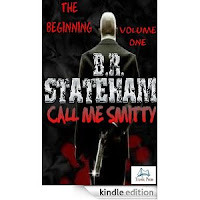 And can you do it with brevity?  Yes.  In the story called Call Me Smitty, found in the first volume of the series  (Call Me Smitty: the Beginning)  a cop who once called himself Johnny is betrayed.  Betrayed ruthlessly by his wife and his brother.  Johnny slips into an insane, murderous rage.

Does he kill his brother and his wife? Ah . . . the first portion of the story certainly sets the reader up for that conclusion.  But . . .

And that’s the other part about writing a good short-story.  Set the reader up for one expectation.  And then throw them into an entirely different bone.  What they think is going to happen and what actually happens turns out to be two entirely different events.

In each of these examples I tried to write verbal portraits of vivid clarity in as few words I could possible muster.  For me, that’s a great short-story.  Clarity.  Brevity.  Emotional.  Vividly memorable.

Oh . . . I know, I know:  sometimes I am so full of myself!  Sometimes I sound like some schmuck who is blowing his horn much too loudly in a crowded building.  But that’s okay.  Someone once told me, “If you don’t believe in yourself, who else will?”

That thought has stuck with me ever since.

4 Responses to Quick Fire At The Slaughterhouse With B.R. Stateham