Quick Fire At The Slaughterhouse With Jason Michel

Posted on February 1, 2012 by richardgodwin

Jason Michel is the visionary editor of Pulp Metal Magazine. He’s also a brilliant writer whose prose straddles Beckett and Celine with the colourful language of surrealism and Noir. In his latest book And The Street Screamed Blue Murder he paints a lurid picture of Paris which is at once totally credible and unbelievably dark. He met me at The Slaughterhouse where we talked about decadence and politics.

Tell us about And The Street Screamed Blue Murder and its mix of surrealism and Noir. It seems that much of your writing is dream related, is that true?

ATSSBM! is the tragic story of poor old Alfie Lime, an underground journalist working for a rag that seems part fact, part fiction & a heavy dose of so-called conspiracy theory. Alfie wakes up one morning to find that something truly horrific has happened in his Parisian flat & using his hack instincts decides to go on a whodunnit that will change his life forever. & boy, does it!

I wanted to write something that picked at a lot of different ideas & my interests & rolled them up into one nasty snotball & let it loose on the world & see where it went.
Film Noir, conspiracy theories, Gnosticism, Sci-Fi, comics, Surrealism … they were all inspirations for it & I hope that I’ve produced something that was a little different from your average whodunnit. Not only in terms of story but stylistically too.

It was while I was writing ATSSBM! that I developed the character Vincent Blake & the whole Stories From Old Lurk. Which is something that I am still working on now & damn it is FUN! Pure imaginative writing. WOO WOO!

& as for the second part of your question. Yeah, I am fascinated by dreams & altered forms of consciousness in general. I always have been. That other private symbolic life that we all live.

They really play a big part in my writing, don’t they?

Do you think the element of decadence, the scar on beauty that Baudelaire described in his Les Fleurs Du Mal as being necessary for him to desire a woman is there on the face of the world we see today as presented to us by the media and if not why do you think they have air brushed it out?

I think there is a little truth in the cliché of loving someone for their imperfections. Of course, these are also the things that can lead to the destruction of relationships &/or people, so one must always tread carefully. When it comes to love … very carefully. The words “moth” & “flame” come to mind.

& yes, the marketers & advertising agencies still try to tell people what beauty is, as if they have the only hold, the unique knowledge. But, of course it is all lies to sell us a lifestyle. A fantasy.

Nothing wrong with fantasy or escapism, but let’s make it OUR fantasy, not those fuckers’.

Most people do not know you are a James Bond villain. Tell us about your experience of it and your plans for world domination.

Well, … the benefits are good, exotic locations for your hideout (tropical islands, fortress in the Himalayas, etc), all manner of interesting man-eating flora & fauna to play with at the weekends, saucy females in short Sixties uniforms running around the place to put lead in your pencil & you get tax-breaks on your equal-opportunity henchmen.

After a hard day’s evil, there’s nothing better than snuggling up in the Lion’s Den with a hired wench, a hot chocolate & a re-run of the Trailer Park Boys. Or a copy of Apostle Rising for giggles.

Someone’s gots to do it!

What are you working on at the moment and do you think Pulp Metal Magazine could alter the political landscape we see today?

Pulp Metal Magazine is only, in any way, political in the sense of freedom of the imagination.

It gives people a bit of escapism from the shitty situation of their lives & the utterly corrupt situation that we all find ourselves in.

It is an Occupation of the Imagination.

In terms of writing, I’m sort of on & off at the moment as I always am after finishing something.

The one thing I want to do this year is work on the mythology of OLD LURK, DEATH STREET & that scoundrel Vincent Blake, so I have one or two more stories already in note form for the Stories From Old Lurk site & a start on the follow up to ATSSBM!, which I’ve tentatively titled – THE REALITY BOMB.

Hopefully that’ll be done by the autumn, but planning to hold the world to ransom is very time-consuming.

Off now to feed the lions.

Thank you Jason for a refreshingly eclectic interview. 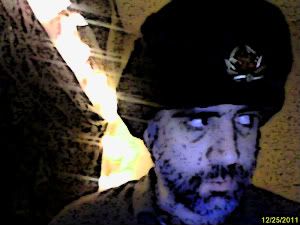 > Get a copy of ‘And The Street Screamed Blue Murder‘ at Amazon US or UK
> ‘Confessions of a Black Dog’ novel website
> ‘The Beaten Dog Bites Back – Pulp Metal Magazine’s Dictatorial’
> Pulp Metal Magazine
> ‘The Wrong Mind : and Other Fictions’ at jason’s Store
> Jason Michel @pulpmetalmag on Twitter

9 Responses to Quick Fire At The Slaughterhouse With Jason Michel